During my recent trip to New York City, I visited a little shop in the West Village called The Meadow. Owned by Mark Bitterman, The Meadow sells more kinds of salts from all over the world than I knew ever existed. 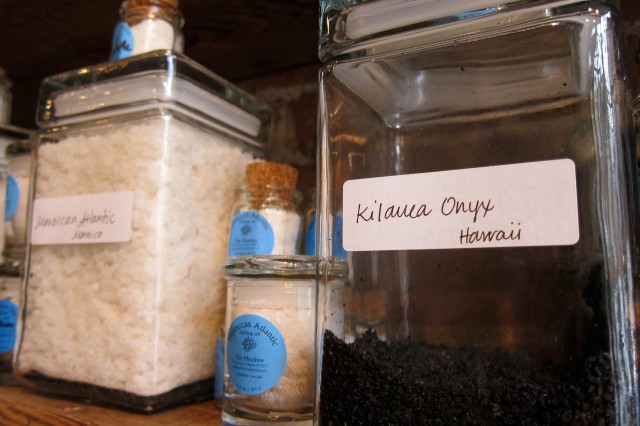 From bright pink Maburoshi plum salt to volcanic black lava salt to chocolate salt, this guy has got it all. (Why have I mentioned these three? Because they are the three salts I bought.)

A quote from Mark Bitterman’s article in the Guardian recently:

“As the most potent flavour enhancer, salt is also among the weirdest and most unpredictable of all the world’s foods. Salt can be blue, green, grey, silver, white, rose, red, orange or purple. It can be monolithic or fractured. Salt crystals come in huge blocks and in microscopic fronds. Shapes range from pyramids to flakes to clumps to cubes; in the instance of a rare African salt from Lake Assal called Djibouti Boule, they even form naturally into near-perfect spheres the size of golf balls. Salt crystallisation seems intent on going rogue, bent on disproving the laws of physics and human expectations.”
(http://www.guardian.co.uk/commentisfree/2011/may/09/salt-seasoning)

My favourite part of the store though was the Himalayan Pink Salt block section. 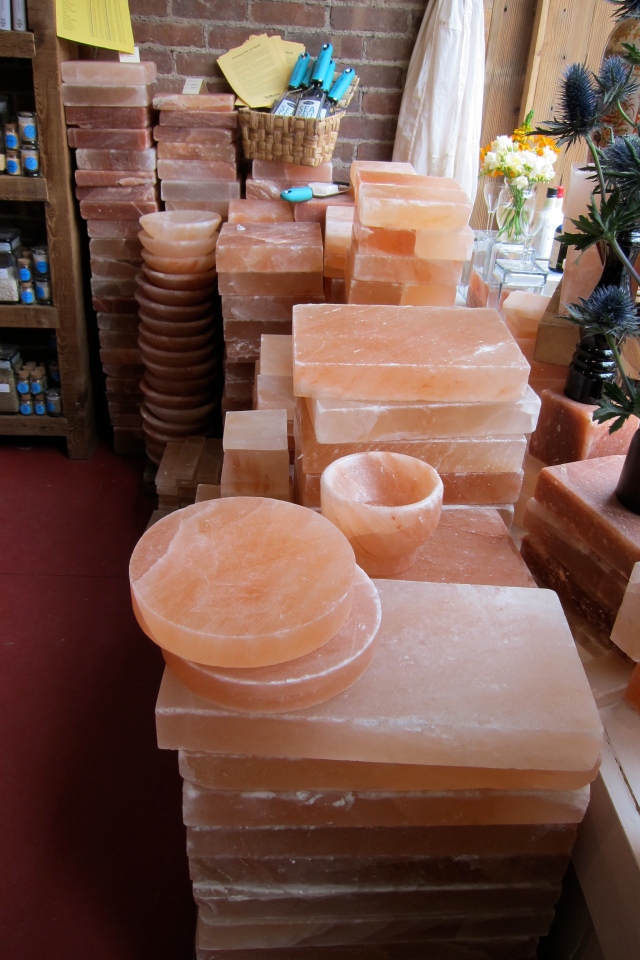 This is a neatly carved block of pink salt from the Pakistani Himalayans. It is 100% salt, and yes, looks good enough to lick, but isn’t quite… unless you want a mouthful of salt.

This little slab can be either used as tableware, to serve food on, or as cookware, to cook food on. The cookware and tableware slabs differ slightly, in that the cookware slabs must be extremely solid, with no cracks, as subjecting them to heat can cause them to crumble. Each cookware slab can be reused roughly 10-15 times. Pretty and pink, but they are a bitch to lug around. I bought 3 of these babies and brought them all the way back home to Singapore. At customs, the guy asked me why my hand carry was so heavy and I told him it was a block of salt. He blinked several times than asked me to repeat myself. Anxious to avoid trouble, I quickly said, its just a piece of tableware. He was so confused he let me through.

The tableware, on the other hand is a perfect thing to serve your food on. Whatever kind of food item you place on it, depending on how ‘wet’ it is, will absorb some of the salt, sometimes fairly quickly. I first used my tableware slabs in Commune Nine where I served prawns and mango. Read my post here.

At Commune Ten, I finally got around to using the slab I bought as cookware. Since it was my first use, I decided to do something simple. I marinated some American scallops with extra virgin olive oil, black pepper and lemon……..minus any salt whatsoever. 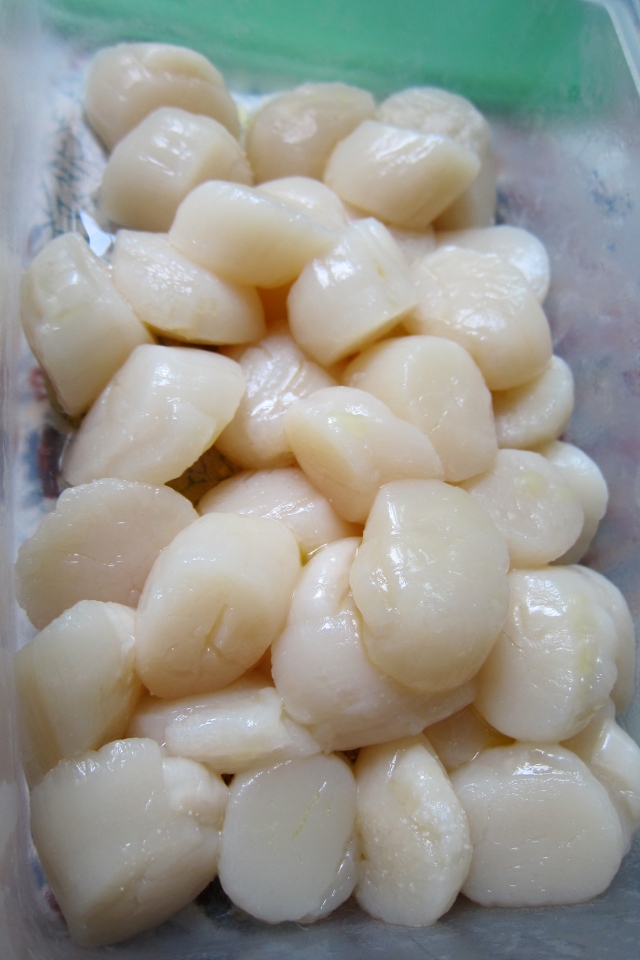 Started heating up the salt block a WHOLE HOUR IN ADVANCE…..it takes awhile for it to heat up, and you want it to be very hot, so that the scallops cook quickly, so that they don’t stay on too long and absorb too much of the salt.

Place the scallops on the salt block, and watch the salt sizzle and foam around the edge of each scallop. It’s like a science experiment, watching the salt block take on a life of its own. I certainly wasn’t expecting all the brown gunk to form…

They cooked fairly fast – I left each scallop on for roughly 10-12 minutes, as they were pretty small, and they came off perfectly seasoned. And even the nature of the seasoning was unusual, as the flavour of the pink salt is fairly unique.

As the scallops cooked, the block got gunkier and gunkier. The salt block is extremely unpredictable, according to the ‘user manual’ and will change colour and develop fissures as you use them. The aftermath:

After use, they need to be rinsed and all the food matter scrubbed off, which will remove a layer of the salt on top. No soap needed due to the anti-microbial properties of the salt.

I served the scallops on my tableware slabs, alongside a peanut and pineapple salad. The saltiness of the scallops complimented the sweet and spicy nature of the salad wonderfully.

The owner of the store, Mark Bitterman, is a salt expert and has even published a book all about…..you guessed it….salt. He claims it should not be as vilified as it is by health experts. Visit the store’s website at www.atthemeadow.com

I am so excited about using my little pink slabs. Looking forward to discovering their many uses over the coming months……until they finally disintegrate after which I can finally use them as bath salts!

This entry was posted in Uncategorized. Bookmark the permalink.

2 Responses to Cooking on a Himalayan Pink Salt Block