The menu for this coming Sunday, my fourth ever commune is also a special one. My bestfriend is in town after 6 months away, and not only will this be her first khana commune, but after five years of being a vegetarian, Jan 16 will also be her first khana commune….as a carnivore revert (saying this makes me so proud…). And so, I’m preparing a sort of, Greatest Hits Menu*….A sort of…..Khana Commune for the Carnivorous Soul. I could wax lyrical about this all day, really. So. I will serve my favorite (and your favorite, according to feedback) three non-veg dishes alongside an assortment of veg accompaniments. As much as I love my dead animal, I do know what constitutes as overkill.

My dear darling S, this one’s for you! Welcome to the darker, infinitely more delicious side……. 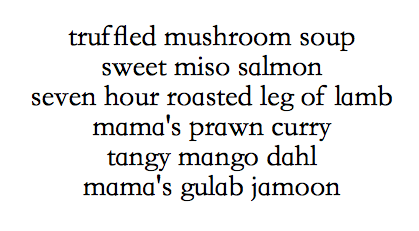 * Note that I am keeping with modern day trends, where musicians release their Greatest Hits within three years of being on the scene (Read: Britney). I am staying true to this and releasing a greatest hits list after a mere three communes……indeed.